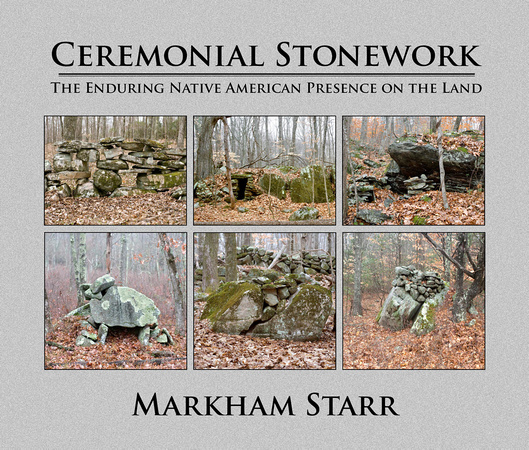 Ceremonial Stonework: The Enduring Native American Presence on the Land

While archaeological evidence shows the first people in New England inhabited the landscape for more than 12,000 years, newly landed colonists from Europe immediately dismissed Native American spiritual practices as pagan rituals to be destroyed or silenced through Christianization. Although disease, war, and other troubles brought to the continent nearly annihilated the indigenous population, the physical manifestations of Native beliefs, wrought in stone, were often ignored. Still standing witness to the strength of their spiritual lives, the stone objects they created remain scattered across the New England landscape. This book takes the reader deep into woods now long abandoned to rediscover the structures they left behind.

After walking hundreds of miles to photograph 8,000 constructions, the author chose 270 color images, separating the work into 25 categories in an attempt to understand their significance. While the exact meaning behind them remains obscure, there can be little doubt of the overall importance of this stonework to its creators or their descendants. Endangered by modern development, Ceremonial Stonework sheds additional light on what has been overlooked and ignored for so long, seeking to help preserve them for generations to come.

Note: Color book sold out. A kindle/tablet version in color is available on Amazon for $9.99